The “Youth must be served”, the development of the Teenage range

The Teenagers range was a true reflection of Clarks capitalising on a period of dramatic social change reflected by the evolution of the ‘teenager’ into mainstream society.

The range itself, aimed specifically at girls, has its roots in the Craftsewn range. The term ‘Teenagers’ made its first appearance in the April 1948 trade and price retail list, and continued up until 1964.

Bill Graves (who had been made responsible for children’s production) was sent to the United States of America in 1952, along with Tony Clark, to research its shoe industry; this included learning about its shoe fashion and marketing. He discovered the rapid social change in post-war society created a new consumer market within the age group of 12 to 18 – the teenager.

Whilst on the 1952 research trip, Tony and Bill came across a popular ballerina-style shoe in Fifth Avenue on the ground floor of the Empire State Building. This shoe became the inspiration for the production of teenager-specific shoes at the Shepton Mallet factory, which specialised in the manufacture of children’s shoes. They named their new shoe ‘Griselda’. Graves claims this was the true beginning of the Teenage range, and it inspired other shoes, including ‘Petronella’. 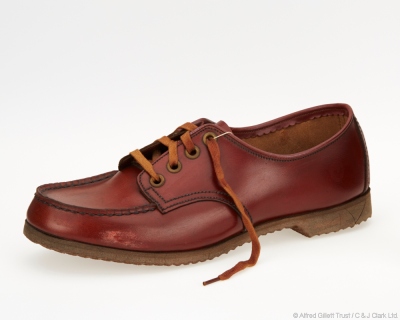 The Trade and Price retail list catalogues and Point of Sale relating to the Teenagers range show Clarks’ realisation of the emergence of the teenager culture. The January 1954 catalogue mentions how this range of shoes is “directed at the growing teenage market – young wage earners with modern ideas and money in their purses.” Furthermore, rock and roll music and dancing inspired Point of Sale show cards and display cards appear prominently throughout the 1950s. Mr. P. T. Clothier, President of the Boot and Shoe Manufacturers’ Federation stated that “Youth must be served”, which was reiterated by Bill: “Teenage boys and girls are suddenly smitten with the tremendous realisation that they are a power of their own, with a separate identity… rock ‘n’ roll is the theme song of the young people, and has moulded them into one universal club.”

The Teenagers range was truly a product of its time, and Bill Graves played a big part in developing the look and tastes of a whole new generation.

← Goodbye, Charlotte!
Being an Investigative Sleuth: Finding Andrew Johnson and Henry Kay Henrion →
Sign up to our Newsletter