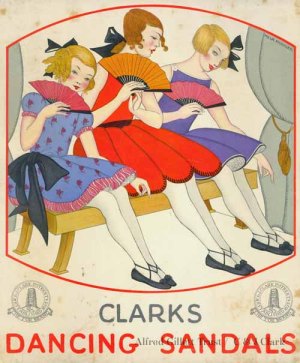 From the early 20th century, Clarks has regularly commissioned Point Of Sale artwork from well-regarded international artists. These commissions were generated sometimes through personal family contacts and acquaintances, such as Mela Koehler (1885-1960) and E H New (1871-1931) who created POS for Clarks during the 1910s and 1920s. Other major commercial illustrators of this period and into the 1930s include Fred Taylor (1875-1963), Edward McKnight Kauffer (1890-1954), Lillian Hocknell (c 1891-1977), Dora M Batty (1900-1966), Bruce Angrave (1914-1983) and Freda Beard (fl 1920s), many of whom worked for other British firms and institutions such as London Transport and the railway companies, or as independent artists and book illustrators in their own right.

Little is known of POS illustration during the 1940s, although G R Morris (fl 1941-1947) and Laura Foster both undertook work for Clarks. In the 1950s, illustration remained a popular method of presenting POS material to the customer. Aubrey Rix (1915-2002) and Alistair Michie (1921-2008) both undertook commissions from Clarks from the early 1950s, with Rix eventually partially superseded by Frenchman Jacques Francois Demachy (1898-fl 1968) who was a well known fashion illustrator who introduced numerous French themes into his development of the Skyline character during the 1950s and 1960s. 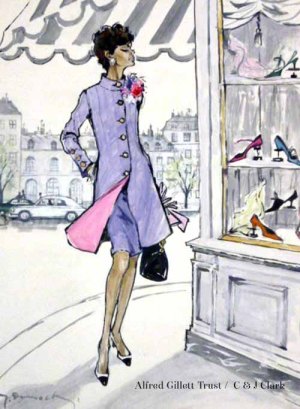 With the advent of alternative printing methods and computerised design technologies, illustration became less popular during the 1960s and 1970s. Collaboration with external creative agencies such as fashion designers and photographers became popular both for product and POS generation by Clarks, including popular advertising campaigns photographed by David Bailey (b 1938) and Helmut Newton (1920-2004) featuring shoe designs by Hardy Amies (1909-2003) and modelled by Jean Shrimpton (b 1942), as well as the Originals’ range including the men’s Desert Boot. Clarks head graphic designer Ian Wills also designed prolifically over a prolonged period from/to, often producing original illustrations as part of his output. However, some traditional-style commercial illustrators were also used during the 1970s (such as Alan Cracknell (b 1937)) and throughout the 1980s, such as Syd Brak (fl 1970s-) and Rene Gruau (1909-2004).