History of Point of Sale 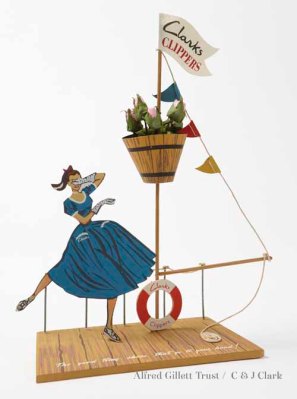 For many years, Clarks used its own model-making workshop and printers in Glastonbury to produce Point of Sale material on a seasonal basis (spring/summer and autumn/winter each year) and by popular range and gender.

In particular, Hugh Bryan Clark (1887-1977) helped to develop Point of Sale as a key marketing tool. As well as recruiting well-regarded illustrators, he also commissioned photographic endorsements from popular British and American actresses and dancers during the 1940s, many photographed by Clark family member John Hinde (1916-1998). Hugh Clark was succeeded as Sales and Marketing Manager by John Anthony ‘Tony’ Clark (1908-1985) in the post WW2 period.

Stanley Berry also played a key role in developing Point of Sale. He joined Clarks as an office boy on leaving school in Street and came from a local family who had worked for the company. He set up the Advertising Department from 1931 and became Head of Advertising in the 1950s. In April 1972 he retired as Advertising Director after more than 50 years with the business. Richard Clark and Glyn Owen Hughes took oversight of the department before the appointment of Michael Fiennes as Marketing Director, with Robert Wallace as Advertising Manager.

1849-1919
The first known and dateable Clarks Point of Sale is by John Aubrey Clark, son of Cyrus Clark, and is a showcard for 1849, featuring a stage/theatre scene in red and green. Point of Sale for this period is very rare, and the collection contains only approximately 50 pieces, many relating to Tor. Also popular was the Hygienic range, dating from the 1880s. Hamilton King’s Dainty showcard showing a female dancer (c. 1905) was apparently thought too racy for the British market.
Styles/ranges: Tor; Hygienic

1910-1919
There is only a limited amount of Point of Sale from this period, most of which are later copies. The collection does include an original drawing by Fred Taylor (1913).
Styles/ranges: Tor; Dainty

2000-present
The post-2000 Point of Sale material has not yet been catalogued.

1 Comments on “History of Point of Sale”