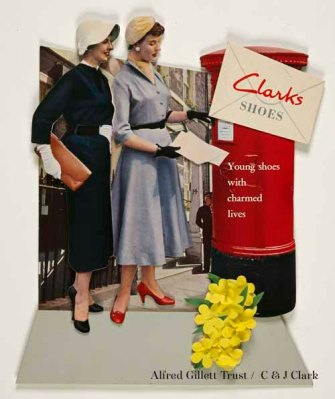 Helen Burke
Worked for Clarks in 1941 appearing in a Skyline shoes promotional leaflet.
An author from the Sunday Pictorial (original name for the Sunday Mirror until it changed in 1963).

Frances Marsden
Worked for Clarks in 1944 advertising Limber Sole sandals.
An American actress who appeared in the musical Panama Hattie at the Piccadilly Theatre in the West End in 1943. She is best known for appearing in No Orchids for Miss Blandish (1948), Rheingold Theatre (1953) and Miss Pilgrim’s Progress (1950).

Bébé Daniels (1901-1971)
Worked for Clark in 1944 advertising Wood-Soled sandals.
Bébé began her career in Hollywood during the silent movie era as a child actress and went on to star in musicals such as 42nd Street (1933). She co-starred with Frances Marsden in the musical Panama Hattie and later gained further fame on radio and television in Britain and appeared in over 230 films.

Jean Kent (1921-2013)
Worked for Clark in 1944 advertising Hyland Gusset shoes.
Jean started her theatrical career in 1931 as a dancer, using the stage name ‘Jean Carr’ when she appeared as a chorus girl at the Windmill Theatre in London. She signed to Gainsborough Pictures during the Second World War. The turning point in her career came when she was given a dramatic part in Fanny by Gaslight (1945). She appeared in several British films during the 1940s and 1950s before turning to television.

Gabrielle Brune (1912-2005)
Work for Clarks in 1945 advertising ‘Wessex Tie’ wedge heels.
A British actress from Dorset, Gabrielle was well known for her roles in Crash of Silence (1952), The Titfield Thunderbolt (1953) and White Fire (1953). During WWII she worked for The Entertainments National Service Association (ENSA), which was set up to provide entertainment for British armed forces personnel during World War II.

Greta Gynt (1916-2000)
Worked for Clark in 1945 advertising hinged wood-soled sandals.
Born Margrethe Woxholt in Norway, Greta started out as a dancer at the age of 12. After the Swedish film Sången till henne (1934), her mother felt she would have better luck in England. She got a letter of recommendation from Fox Film and moved and played lead roles in British films during the 1930s and 1940s. She was marketed as the British Jean Harlow, but had an unsuccessful career in the US.

Julia ‘Toots’ Lockwood (b 1941)
Worked for Clarks in 1946.
Born Margaret Julia de Leon, Julia starred in UK films from the age of five, and performed with her mother Margaret Lockwood on screen and stage. She is best known for appearing in The Flying Swan (1965), The Flying Eye (1955) and Beware of Children (1961).

Pamela Matthews (1922-2002)
Worked for Clarks in 1946 advertising the Eskimo range, photographed by Shaw Wildman.
British born actress Pamela was best known for her work on The Sound of Music (1965), The Buccaneer (1958) and Secret Flight (1946). She was married to Italian actor Cesare Danova.

Moira Lister (1923-2007)
Worked for Clarks in 1947 advertising Bootees.
Moira Lister de Gachassin-Lafite, Vicomtesse d’Orthez, was a South African-born, English film, stage and television actress. She is best known for her roles in Noel Coward’s play, Present Laughter (1947) and on Hancock’s Half Hour on the radio in 1950s.

Jean Simmons (1929-2010)
Worked for Clarks in 1947.
A successful British-American actress, Jean appeared in many major films from the 1940s and onwards including Great Expectations (1946), the Frank Sinatra/Marlon Brando musical Guys and Dolls (1955), Spartacus (1960) and Howl’s Moving Castle (2004). She was appearing in Uncle Silas (1947) at the time of her endorsement for Clarks.

Margaret Lockwood CBE (1916-1990)
Worked for Clarks in 1947 and 1951 advertising ‘Bellagio’ Skyline shoes.
Notable for her performances in the Gainsborough Pictures melodramas The Man in Grey (1943), The Wicked Lady (1945) and Alfred Hitchcock’s The Lady Vanishes (1938). She made a return to the stage in a record-breaking national tour of Noel Coward’s Private Lives (1949) and was appointed Commander of the Order of the British Empire in 1981.

Valerie Hobson (1917-1998)
Worked for Clarks in 1947.
A British actress who starred in a number of films during the 1940s and 1950s. Her most noted roles were in Great Expectations (1946) and Kind Hearts and Coronets (1949). Her second husband was Government Minister, John Profumo, who was the subject of a sensational sex scandal in 1963. Her last starring role was in the original London production of Rogers and Hammerstein’s The King and I (1953) which ran for 926 performances.

Ann Todd (1909-1993)
Worked for Clarks in 1947 advertising ‘Louisville’ Skyline shoes.
British-born actress Ann was known as the ‘pocket Garbo’ for her diminutive, blonde beauty. She became popular following appearances in films such as Perfect Strangers (1945), The Seventh Veil (1945) and Alfred Hitchcock’s The Paradine Case (1947).

Hazel Court (1926-2008)
Worked for Clarks in 1948.
An English actress best known for her roles in horror films during the 1950s and 1960s. She won a British Critics Award for her role in Carnival (1946) and also appeared in Holiday Camp (1947) and Bond Street (1948). In 1957 she starred in what is seen as her career-defining role in the first colour Hammer Horror film The Curse of Frankenstein.

Beatrice Campbell (1922 -1979)
Worked for Clarks in 1948.
After a distinguished London stage career, Campbell entered film in the mid-1940s. She received positive notices internationally for her performances in Silent Dust (1949) and Last Holiday (1950) with Alec Guinness.

Helen Shingler (b 1919)
Worked for Clarks in 1948.
London-born actress Shingler was best known for her roles in The Rossiter Case (1951), Judgement Deferred (1952) and Pygmalion (1981). She was previously married to filmmaker Seafield Head.

Eileen Herlie (1918-2008)
Worked for Clarks in 1949.
Glasgow-born Herlie trained as a theatre actress and was noted for her role in Jean Cocteau’s The Eagle has Two Heads (1948). Her big break was being cast in Laurence Olivier’s Hamlet (1948) playing his mother, Gertrude. She continued with films and appearing on stage until 1976 where she moved into television.

Cecilia Colledge (1920-2008)
Worked for Clarks in 1949 advertising the Snowdale Overboot.
Colledge was a British figure skater that was the 1936 Olympic silver medallist, 1937 World Champion, 1937-1939 European Champion and a six-time (1935-1939, 1945) British National champion. She is credited as being the first female to perform a double jump, as well as being the inventor of the camel spin and the layback spin.

Glynis Johns (b 1923)
Worked for Clarks in 1949 advertising the Eskimos range.
British stage and film dancer, actress, pianist and singer. She is best known for playing the role Winifred Banks in Mary Poppins (1964) and creating the role of Desiree Armfeldt in A Little Light Music (1973) on Broadway, for which she won a Tony Award.

Dolores Grey (1924-2002)
Worked for Clarks in 1949 advertising the Clippers range.
An American actress and singer who was nominated twice for the Tony Award for Best Lead in a Musical and won once for her role in Carnival in Flanders (1953). She had many roles on screen and on stage and also sang Marilyn Monroe’s part on the soundtrack album of There’s No Business Like Show Business (1954).

Christine Norden (1924-1988)
Worked for Clarks in 1949 advertising ‘Saratoga’ Clippers and 1950 advertising Pola Boots.
Norden gained experience of singing and dancing whilst performing in wartime Entertainments National Service Association (ENSA) concerts and variety shows. Her best known appearances were in An Ideal Husband (1947), Mine Own Executioner (1947) and Saints and Sinners (1949) for which she won a British National Film Award. In 1967, she caused a sensation by being the first actress to appear topless on Broadway, in the comedy Scuba Duba.

Moira Shearer (1926-2006)
Worked for Clarks in 1950 advertising the Eskimos range.
An internally renowned British ballet dancer and actress. She received her professional training at the Mayfair School and The Nicholas Legat Studio, before joining the Sadler’s Wells Ballet School. She came to international attention for her first film role as Victoria Page in The Red Shoes (1948). She retired from ballet in 1953, but continued to act.

Margaret Leighton (1922-1976)
Worked for Clarks in 1951 advertising ‘Orlando’ Skyline shoes.
She made her classical stage debut at age 16 and joined the Old Vic Company under the direction of Laurence Olivier and Ralph Richardson and in the late 1940s and 1950s. She created the role of Hannah Jelkes in Tennessee Williams’ The Night of the Iguana (1964). She won the Tony Awards for Best Actress in a Play for her performance in Separate Tables (1956) and a British BAFTA Film Award for Best Supporting Actress in The Go-Between (1970).

Pat Kirkwood (1921-2007)
Worked for Clarks in 1951 advertising ‘Bellagio’ and ‘San Remo’ Skyline shoes.
British stage actress who appeared in numerous performances of dramas, cabaret, revues, music hall, variety and pantomimes. She was best known for appearing in Come on George! (1939), Once a Sinner (1950) and After the Ball (1957). She was the first woman to have her own television series on the BBC.