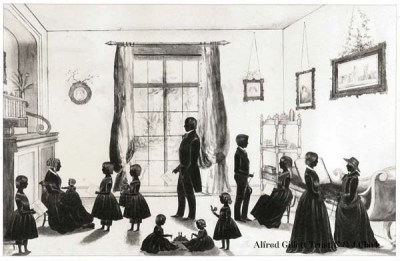 The Clark family archives held by the Alfred Gillett Trust encompass some four hundred years of the history of the family and its wider branches throughout Somerset, the rest of the UK and internationally. The collections are vast and as yet widely untapped (see family publications), offering rich scope for original research by academics and enthusiasts alike.

The collections are extensive in their scope, containing thousands of school books, personal letters, diaries and journals, travel accounts, photographs, literary and local history writings, scientific papers, artwork and autobiographies. An eclectic range of family objects are also often included in the collections, often items of particular personal significance such as reading glasses or items of clothing.

Collections relating to the family are also found in the business archives, such as Number One Office (NoOne), since the distinctions between the Clark family and its family directors of C & J Clark Ltd have not always been made clearly. Family photographs are available also in the Trust’s photograph collections and books in the library collections.

The family archive collections are generally arranged according to family member or family residence. The vast majority of the collections have a box list available which Trust staff can search on your behalf. An index and a family tree are available which show the holdings for significant members of the Clark family and give an overview of how the Trust’s principal family archive collections and their provenance are linked through Clark kinship connections. Where names are highlighted, a collection overview gives further details on a particular archive.

James Clark and his family at Netherleigh, 1858

The Clark family orginate from farming stock on the Somerset Levels in the villages of Catcott and Greinton and came east to Street in the 18th century to settle permanently and to build up the hamlet into a thriving company village. They were active as Quakers from the earliest days of the Religious Society of Friends in Somerset and were closely associated in Street with the Clothier (CLO),  another of the pre-eminent Quaker families locally.

The collections held by the Trust trace their provenance chiefly to the descendants of James Clark, one of the founders of C & J Clark Ltd. A small collection of miscellaneous Family (FAM) papers contains additional items of interest.

The papers of Helen Sophia H Clark (HSHC) include many items relating directly to the life of James Clark and his immediate family, since her father-in-law J Edmund Clark had inherited many papers as one of the longest surviving of his own 13 siblings. One of his siblings, Edith Clark, married into the Hinde family of Croydon, Surrey, and the archive of her granddaughter Joyce Green (JG) traces the history of Wilfred Hinde and Karl Hinde who both worked for the company for many years.

The nucleus of the Trust’s family archive collections are the major Millfield and Whitenights’ collections. The collections are two of the largest family archives held by the Trust and contain material relating to the Clarks in particular, as well as many off-branches of the wider Clark clan, such as the Priestmans, a prominent Quaker family in Newcastle, and the Bancroft Family (BAN), a distantly related branch of the Clarks in Delaware, USA, but with roots in Rochdale, Lancashire.

William Stephens Clark and Helen Priestman Bright’s home Millfield (MIL), on the southern edge of Street and now a public school, became a centre of Southwest intellectual activity. The collection includes papers of Helen’s father John Bright, her daughter Alice Clark, her aunt Sophia Sturge Clark and her Priestman aunts – these were all active campaigners for Quaker concerns such as suffrage, temperance, anti-slavery and pacificism, as well as health, welfare and Education (EDU). Similarly, William and Helen’s  son Roger Clark and his wife Sarah Bancroft Clark also ran an open house in line with their many cultural and philanthropic interests at their home Whitenights (WN), originally Overleigh Farm. The writer Laurence Housman (LH) became a close friend and active in their family circle when he moved to Street under Roger and Sarah’s patronage in 1924. For many years at the Street Library, his papers are now held by the Trust. Roger and Sarah’s eldest son William Bancroft Clark (BC) lived for much of his life at the Clark ancestral home Hindhayes, and left extensive papers relating to his time as Director and Managing Director of C & J Clark Ltd and to his links with his family.

Two daughters of William and Helen Clark also have their own archive collections in the care of the Trust. Margaret Clark Gillett (MCG) spent much of her married life in Oxford but remained closely involved in the concerns of her Street relations, like her youngest sister Hilda Clark (HC) spent much of her career elsewhere or abroad in her work as a doctor.

The Bright, Pease and Clothier Families

Through the marriage of Helen Priestman Bright to William Stephens Clark, the Street Clarks became intimately connected to the Bright family of Rochdale and their wider kin such as the Priestmans, Braggs, Wheelers and Tanners. In particular, Helen’s father John Bright (JB) came regularly to Street and played some part in local affairs, often appearing as a dignitary.

In addition, Helen and William’s eldest son John Bright Clark (JBC) married Caroline Pease (PEASE), of eminent Bristol and Yorkshire Quaker origins, with the young couple living at Overleigh House on the edge of Street next to Whitenights and also close to Leigh Holt where their eldest daughter Esther was resident with her husband S T Cothier (CLO).

Finally, the Village Album (VA) collection records 150 years of the Clark family’s literary endeavours, constituting 99 volumes of their sketches, poems, natural history notes, travel musings and other efforts. Meeting with their wider family from Street and Glastonbury, the regular gatherings followed the popular trend for essay societies and book meetings among the Quaker community and combined a means of entertainment as well as intellectual stimulation. The current Clark descendants will gather on an annual basis to keep the tradition alive.