Whilst cataloguing and numbering the Point of Sale collection, I’ve come across many interesting things: symbols used as illustrators’ signatures, famous actresses and photographers collaborating with Clarks, plus angry starfish and dancing crocodiles.

The angry starfish and dancing crocodiles we’ll come to another time, but the fun part of not knowing too much about graphic designers, illustrators, and artists from the 1910s to the 1950s, is the research I get to do to find out more about them. It’s important to understand these collaborators holistically to contextualise their relationship with Clarks. This can help us to try and work out how the Company made decisions about working with these designers, illustrators and artists.

So I had to take off my Documentation Beret and pop on my Detective’s Fedora, which has gotten more use whilst working here, and do a little investigating.  Unfortunately with Google and Wikipedia being so easily accessible and increasingly accurate, there are sometimes very few opportunities to do a bit of proper sleuthing, so I was quite excited when I came across Andrew Johnson and Henry Kay Henrion. 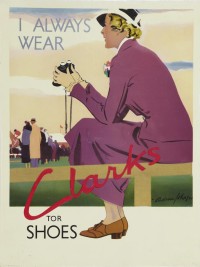 Before you ask, no, the 17th President of the United States wasn’t an avid sketcher of people wearing shoes and shoes in general, not to my knowledge anyway! Aside from the former President, and a more contemporary illustrator, Google couldn’t really help with a simple search. I had to try numerous things such as ‘Andrew Johnson artist 1935’ – 1935 being a date from some of his artwork in the ‘Point of Sale’ collection. With a little bit of thinking outside the box, I got a few hits. Nothing straightforward mind you, but then that wouldn’t be fun. The artist didn’t have a Wiki page or a dedicated website, but there were hints of this elusive Andrew Johnson, and I was ecstatic when I came across a few images of what could only be his work from the Science Museum Group.

This image is used courtesy of the National Railway Museum (1928)

Noticing that the majority of images came from the National Railway Museum, England, I got in touch with them straight away to see if they had any information about Andrew Johnson. I had very little to add to his biographical record on the collections database – nothing except his name and the years he worked for Clarks. I was really hoping that I would get some, or any, information.

I was lucky enough to have the aid of Joe Lane, one of the ‘Search Engine Assistants’. He was extremely thorough with his research of Andrew Johnson and was more than willing to share what information they had plus anything he uncovered whilst investigating my enquiry. When I viewed the images from the NRM collection next to our own, it was immediately possible to detect the pattern of development in Johnson’s style.

This image is used courtesy of the National Railway Museum (1931)

Born in Portsmouth, he began life as Arthur Polkinghorne Johnson, the youngest of four children to Charles Johnson, a painter and decorator, and his Cornish-born wife Ada.

Johnson trained at the Central School of Art and Design in London (now known as Central Saint Martins College of Arts and Design). A British commercial artist, whose designs often had a historic theme, he mostly worked throughout the 1920s and 1930s when he was commissioned by the London and North Eastern Railway Company to produce posters. Amongst his posters for LNER were fine examples promoting Scarborough and North Berwick. His advertisements for Hudson’s soaps in 1924 show steam railways and a Victorian cricket match.

Though primarily a landscape artist, he worked for Shell, Lux, Lever Bros, The Times, Moss Bros, Legal & General and the Southern Railway Company. He also worked in America where he created work for General Motors. His work is owned and exhibited by the V&A, the London Transport Museum and the National Railway Museum (England).

With Henrion, I had a completely different river to cross. We only had one image from him, so I was curious to know whether or not he had created a substantial body of work for Clarks. Unfortunately we did not have any documentation which indicated the period of his involvement with the Company. 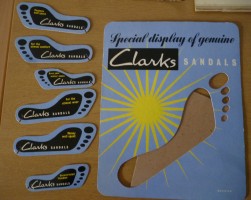 So, even though his Wiki page gave me sufficient background information for the collections database, I wanted to know more.  It was really exciting to discover that there was an archive devoted to Henrion in the Design Archives at Brighton University. I got in touch with them to see what sort of documentation they had and if they had any Clarks ‘Point of Sale’ material in their collection. As theirs is principally a visual archive, they didn’t have much in the way of documentation. Sue (from the Brighton University Archive) was extremely helpful with sharing what she knew and offering suggestions as to where to go next for more information – she recommended the History of Advertising Trust.

It was interesting to compare information given to me from both organisations and piece together key facts about Henrion’s output. The Brighton University Archive had the same piece of ‘Point of Sale’ imagery, but without the smaller ‘foot’ pieces, so they were pleased to see the ‘Point of Sale’ set in its entirety.

FHK Henrion (born Heinrich Fritz Kohn) originally came from Germany, and trained in Paris as a textile designer before moving to England and joining the Poster Design School run by Paul Colin. He quickly became a skilled and celebrated poster designer. 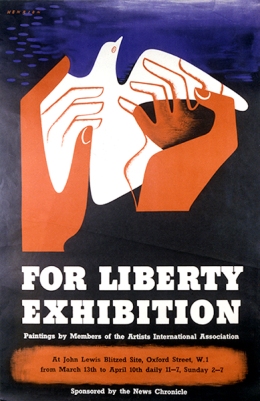 During the Second World War he was employed by the British and the US Ministries of Information. He designed posters for campaigns such as ‘Dig for Victory’, ‘Aid the Wounded’ and ‘Grow More Food’.

From 1942 he worked with W.S Crawfords Ltd, and in 1946 became their Chief Consultant Designer. He was elected Royal Designer for Industry in 1959 and was awarded an MBE in 1951 and again in 1985. He is known as one of the founding fathers of modern corporate identity in Europe. Henrion’s Archive and Library are located at the University of Brighton. The image the Archive sent to me for this blog post, ‘For Liberty’ is contemporary with our example and showcases his poster design and interest in  fine art and exhibitions. The exhibition advertised in this image was organised by the Artists’ International Exhibition Group.

Working with the National Railway Museum and the Henrion Design Archives at Brighton University, made me realise the value of collaboration with the wider Museum and Archive community and demonstrated how all of our collections, when considered together, can help illustrate hitherto unknown facts about artists’ and illustrators’ lives. I look forward to further fruitful partnership to discover more about the artists and illustrators who helped shape Clarks’ public image.

← The “Youth must be served”, the development of the Teenage range
BRAND DESIGN COMPETITION – WIN £250 →
Sign up to our Newsletter

We are excited to announce the Reading room has now re-opened.

As ever booking is essential.

If you would like to access the collections in person please contact a member of the collections team who will be pleased to help identify material relevant to your area of research.

Happy #FunFriday. In the 1960s @Clarksshoes collaborated with #FashionDesigner #HardyAmies to introduce a sense of carefree glamour to their Men’s footwear ranges. The resulting campaign played with concepts of what was perceived as the hallmark of the successful and stylish man… #OfTheTime......head on over to @Fashion_Museum_Bath to see more!
This #ThrowbackThursday over at @Fashion_Museum_Bath we are showcasing beautiful #ArtDeco esque illustrations like this one from 1934 of women’s footwear. At that time, you could still have your shoes dyed to match your dress!