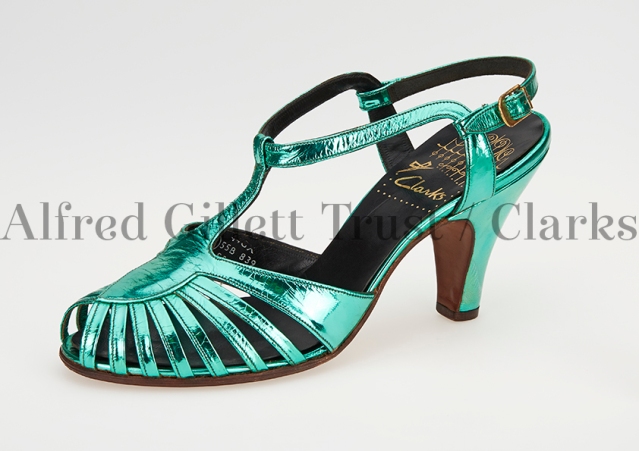 The Shoe Digitisation Project reached a major milestone this week; the 1,000th shoe was photographed, cleaned, documented and safely packed away by the team at the Alfred Gillett Trust.

The striking sandal which claims the title of 1,000th shoe is a 1955 Clarks leather T-bar sandal from the Wessex range. It was donated to the collection in 1973.

The Wessex range had its origins in the 1920s and the name was revived in the 1950s for Clarks’ range of women’s fashion shoes.

During the 1950s Clarks experienced rapid growth and grew from producing 2.7m to 8.5m pairs of shoes in the decade. The company increased their number of ‘Peter Lord’ branded shops from 2 to 48 and began advertising on television for the first time.

The company had several key ranges which are well represented in our historic collection; the Clippers range sold 1 million pairs, the more casual and colourful Sailmakers also proved popular and the Serenity range introduced from 1948 became a firm customer favourite.

← 1950s Court Shoes from the Clarks Wessex Range
Tamise from the Couture Collection, 1959 →

This site uses Akismet to reduce spam. Learn how your comment data is processed.