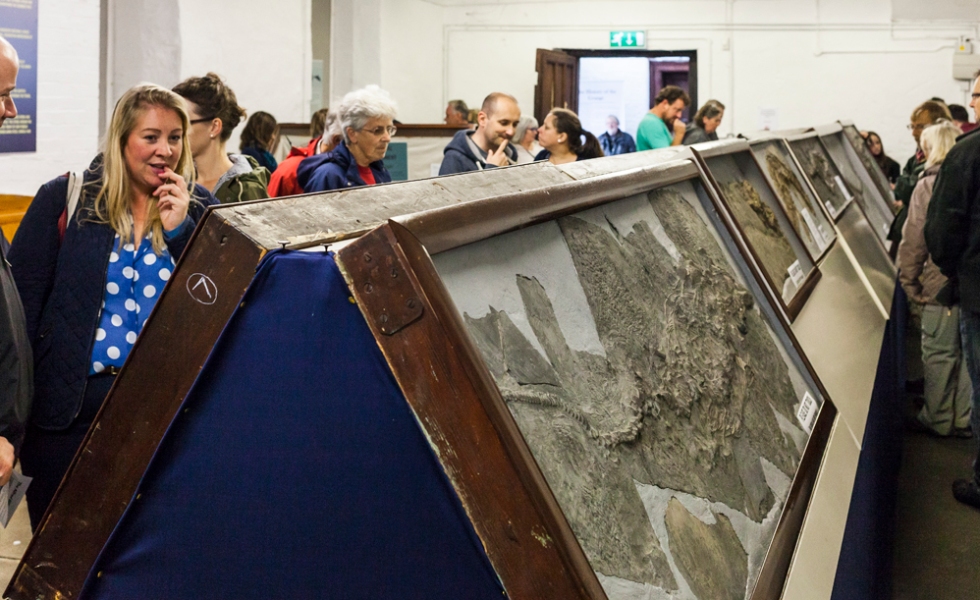 This October half-term, the Alfred Gillett Trust are hosting a free pop-up exhibition of fossilised ichthyosaurs found in Street. From 29 October to 3 November, the public can view the fossils and learn about their discovery and what they tell us about the local environment. There will be a selection of roar-some kids activities taking place throughout the week.

Known as ‘sea dragons’, ichthyosaurs were dolphin-like marine reptiles which swam in the warm seas which covered Somerset around 200 million years ago. Street is known internationally for the quality and quantity of the fossils found in the local Blue Lias rock.

The fossils were found in local quarries in the 19th century by Alfred Gillett, a cousin of the founders of Clarks the shoemakers. First displayed in Glastonbury Town Hall in 1880, the fossils were soon moved into a purpose-built Geological Museum in Crispin Hall in Street, which was opened in 1887.

Noted geologists and academics visited the collection to study them, along with tourists and residents in the locality of Street. Such was the importance of the collection and the affection held for the fossils in the area that the newly formed Street Urban District Council chose the ichthyosaur as their symbol in 1894. It is still used today by local societies and associations.

The fossils were finally taken off public display in 1978 when they were moved into storage for conservation. Now the Trust is opening up the collection to give locals and visitors another chance to come face-to-face with the famed sea dragons.

The exhibition is open to the public throughout half-term from 10am to 5pm (Monday 29 October to Saturday 3 November). Entrance is free, but donations towards the care and future display of the fossils would be gratefully received.

We are excited to announce the Reading room has now re-opened.

As ever booking is essential.

If you would like to access the collections in person please contact a member of the collections team who will be pleased to help identify material relevant to your area of research.

Happy #FunFriday. In the 1960s @Clarksshoes collaborated with #FashionDesigner #HardyAmies to introduce a sense of carefree glamour to their Men’s footwear ranges. The resulting campaign played with concepts of what was perceived as the hallmark of the successful and stylish man… #OfTheTime......head on over to @Fashion_Museum_Bath to see more!
This #ThrowbackThursday over at @Fashion_Museum_Bath we are showcasing beautiful #ArtDeco esque illustrations like this one from 1934 of women’s footwear. At that time, you could still have your shoes dyed to match your dress!